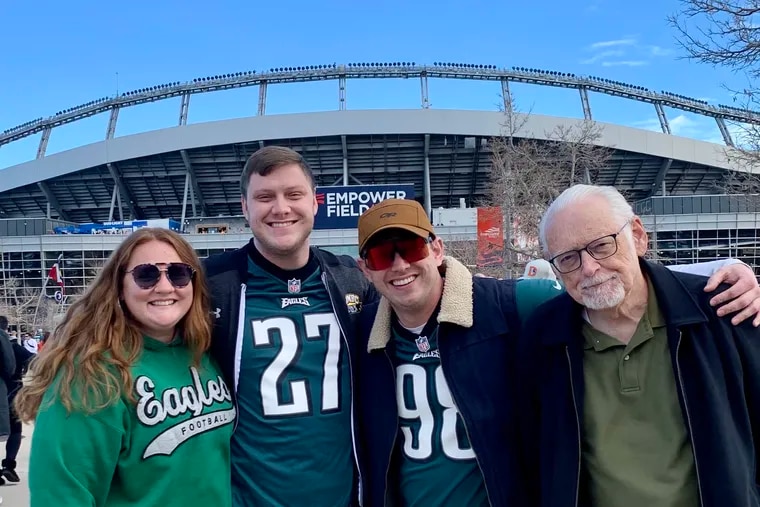 ‘A special moment’: After covering the Eagles for 19 years, a reporter watches a game with his sons

In a way, it wasn’t new to me, watching through binoculars an Eagles player pick up a fumble and take off.

The way the view through the lenses went up and down was a little different. A brave contingent of Eagles fans trampled and rocked the metal stalls in the end zone we were sitting in at Empower Field in Denver.

Then there was my son, Dan, to my left, screaming, “Come down! Get off! ”- a warning that would prove to be misguided – as Darius Slay slashed down the middle, dropped the ball, picked it up again, made his way to the sideline and accelerated 83 yards for the touchdown that went defined the Eagles from Nov. 30 to 13. Nov. 14 victory over the Broncos.

I spent 19 years covering the Eagles for NFL press boxes, who tend not to jump up and down. I’m sure Dan and his older brother Matt gave a lot of off-the-cuff advice to Eagles players and coaches during this time, but I was never sitting down with them to hear it.

I retired from The Inquirer in August at age 65. Matt is 32 years old. Dan is 28 years old. Scores of fathers and sons in the Delaware Valley have spent two decades closely following the struggles of the Eagles, never watching a game together, in person?

There’s a video of Matt at a friend’s house in South Jersey crying tears of joy as he talks on the phone with Dan at the end of the Eagles’ win over the Patriots in Super Bowl LII. I was not involved in their celebration; I was running into US Bank Stadium in Minneapolis, tie askew, reporting and writing a Doug Pederson story.

Retirement is a scary word. To embrace it you have to get past the idea that with the end of your working life you are just counting the days until you get rid of that deadly coil. (Hey, we’re counting all these days, some of us just don’t have to fill out expense reports anymore.)

I’m grateful, today, to be retired, because so far this has been what I envisioned – a chance to be there for my family in a way I couldn’t have be during my 43 year career as a journalist.

When the NFL calendar came out last spring, I hadn’t decided to hang up my laptop yet. We discussed making the trip to Denver a family occasion, although we knew that when it came time to play I would be working, as was the case when the boys and sometimes my wife, Barbara, attended games at the Lincoln Financial Field.

There has always been this barrier. Dan’s wife, Brelyn, is from a large extended family, the Howards, who host home games around a rigged Kelly Green bus. The last few years I would stop on my way to the press box, contact everyone, but they were fans having fun, and I was a drove guy to work. No beer for me, thank you very much anyway.

That day, the barrier had finally fallen, neither a tie nor a press card hung around my neck. Sure, there was beer, from a concession run by a local brewery. The afternoon sun was reflected on our faces in Section 117, Row 41, Seats 7-10, Bowen and Brelyn’s three men.

I was wearing an old olive green LL Bean long sleeve polo shirt, which was kind of a compromise. The boys and Brelyn thought the shirt I had planned to wear mimicked the Broncos orange and blue too closely. I explained that I’m not really, you know, a FAN, even though I’m retired and sitting in the stands. I still do journalism here and there. I wouldn’t feel comfortable wearing an Eagles jersey. (If I ever felt comfortable it would be in Brandon Graham’s 55, by the way.) So I donned the well-traveled olive polo shirt.

The gaming experience was almost perfect, as was the whole weekend. I was sorry Barbara missed it. She stayed home with our dog because she’s not a big fan of long flights, and we had just visited Matt and Clare in Denver about seven weeks earlier, as they moved into their new home (which happened to be within walking distance of the stadium). That September visit, too, was something I couldn’t have handled before I retired.

The mood of our November afternoon at Empower Field was not reminiscent of Field of dreams. The boys and Brelyn are adults. There weren’t many “Jeepers, daddy, there’s Jalen Hurts!” But we were together in awe of Slay’s feat and bemoaning another Derek Barnett penalty, watching in amazement as K’Von Wallace blocked a basket and apprehension as Kenny Gainwell missed a blitzer, causing Hurts to intercept.

It would have been great to have done this, say, 15 years earlier, when the boys were younger and wide eyed. But this time in our lives is also precious. Dan and Brelyn are newlyweds and move to Baltimore after their graduate studies at LSU. Matt and Clare (she’s not from Philly and opted for peace and quiet on game day) are new owners whose adaptation to an adopted western town has been delayed by the pandemic.

Getting together for an Eagles game isn’t going to get any easier. I will continue to age. For them there could be babies and more movements and complications that we cannot predict.

But we were there that day, united by a golden, happy, healthy afternoon talking about our lives, hopes and memories, as the Eagles put on one of their best performances ever. these last years.

We then lingered, as many Eagles fans did, taking celebratory photos. Debbie from Cinnaminson, who was also visiting a son who had moved to Denver, offered to pick up one of our party members.

Normally by then I would have rushed into the press conference room, thinking about what to ask, what to write. Instead, I watched the boys and Brelyn bask in the stride. Fans who had gathered around the Eagles tunnel cheered on every start, with some players stopping to sign autographs. We tried to determine who had received the loudest standing ovations.

Dan said his next challenge would be to properly introduce me and his mom to tailgating. Matt said he wanted to provide me with something sharp and witty to include here, but decided “it was just a really special moment, and I think I’m going to leave it there.”

I know I will remember this game much more vividly than most of the 350+ I have covered.

I had a very different point of view.

Les Bowens is a former Eagles reporter for The Inquirer. He can be contacted at [email protected]