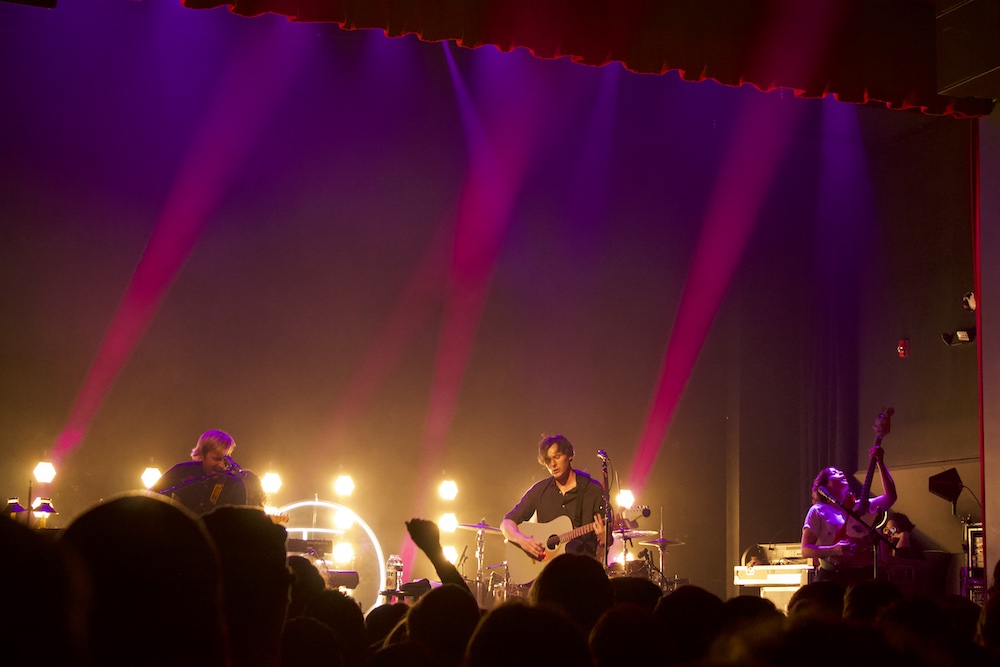 New Jersey alt-heroes The Front Bottoms kicked off a three-night run at White Eagle Hall in Jersey City on May 18. All three shows sold out fairly quickly, with each night offering a different lineup of opening artists.

The Front Bottoms hail from Woodcliff Lake and consist largely of two longtime members; Brian Sella on guitar and vocals and Matt Uychich on drums. Formed in 2006, the band released their self-titled debut album in 2011, but really hit their stride with their second album, Falcon’s Talon. From there, they were signed to pop punk labels Run for Cover Records as well as Fueled by Ramen.

Opening for them on Night One was New York comedian Ian Fidance and Philadelphia alternative band Riverby. Ian took the stage at 8pm and started cracking jokes about dog pomp, condemning his cats by naming them, sobriety at the age of legalization, etc. After his 15-minute set, he announced Riverby onstage. The quintet of August, G, Mol, Tyler and Doug are riding the wave of their second album, Absolutionwhich fell earlier this year.

After their first song, the lead singer joked, “The good thing is none of you know who we are, so there’s no expectation.” Someone from the crowd replied, “Yes.” “You do? Shit.” The crowd laughed. Two standout songs from their set were “Baseless” about sweet revenge and their final song “Smart Mouth”. Riverby posted this show as their biggest gig yet, and with their agonizing, catchy grooves, they’ll go a long way. Glad to see them downstairs at one of my favorite places!

Matt and Brian hit the stage soon after alongside four touring musicians. “Montgomery Forever” started its set followed by “Backflip”. The ground was shaking from all the excited fans jumping up and down.

“I don’t know about you, but it feels like a Friday night to me,” Brian said afterwards. “We’re back…back to JC…just you and me…” which led to the “Historical Graveyard”. Brian is charming, but simultaneously laser-focused. He stands confidently behind that mic stand, and much of the sweetness of their lyrics is behind him.

The Front Bottoms will always remind me of freshman year in college. All my friends in the dorm were talking about this popular band gaining traction with this song “Twin Sized Mattress”. Then I got used to it thanks to my college radio. Admittedly, I wasn’t a huge fan, and I think that was largely down to Brian’s voice. My opinion has changed; his voice sounds much more developed live. They are an example of better sounding live than on studio recordings in my opinion. The acoustics of the White Eagle Hall undoubtedly contribute to this.

The band played 20 songs; all of their hits accounted for – “Maps”, “Love at First Sight”, “Peach” and ending with a two-song encore of “More than It Hurts You” and “Leaf Pile”. The shouts of the crowd who knew every word were deafening. If Night One is any indication how much we’ve missed the duo, then Nights Two and Three will be equally memorable. These shows are the band’s first in 2022, and they’re sure to be triumphant.