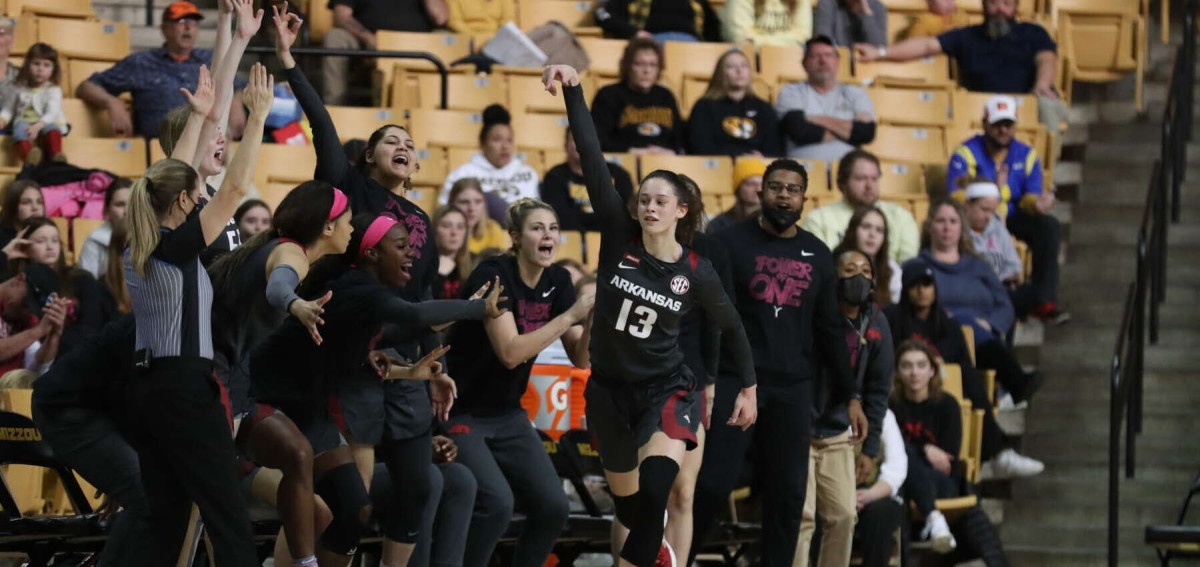 COLUMBIA, Mo. – Arkansas Women’s Basketball (16-8, 6-5) won its second straight game Sunday afternoon at Mizzou Arena, leading a 54-point second half to an 88-71 win over Missouri (16-9, 5-7). With the victory, the Hogs have now won six straight games against their rivals. Head coach Mike Neighbors’ team put in arguably their best performance of the season on Sunday — they shot 47% from the field, 40% from three, and outscored the Tigers on the glass, 49-37.

Redshirt senior guard Amber Ramirez’s stellar season continued, as she went for 25 points and nine rebounds in the win. The Splash Sister was held scoreless in the first quarter but dominated from them, finishing with their seventh 20+ point game of the season. Rookie Samara Spencer was excellent on her return to the floor, posting a career-high 22 points, seven rebounds and four assists.

Mizzou headed for the locker room at half-time with serious momentum, as Aijha Blackwell fell in one-and-one to close the scoring for the first half. Blackwell and the Tigers entered intermission with a 41-34 lead, limiting the Hogs to just 36 percent shooting from the field in the first two quarters.

Arkansas turned up the heat in the second half, however, dominating the home side in the final two frames, 54-30. Spencer and Sasha Goforth dropped 15 apiece after the break, while Ramirez added 14. The Hogs entered the fourth quarter with a four lead, having trailed by no less than 11 in the third period. Ramirez had several spectacular, momentum-changing plays in the half, but none were bigger than his deep triple that beat the third-quarter buzzer.

The Hogs would blow up the game in the final period, beating the Tigers 26-12. The neighbors team had eight of their 13 shots on the frame, including three of four from downtown.

The Razorbacks will stay on the road and travel to Gainesville for a showdown with the Florida Gators. The Hogs will play Thursday, Feb. 17, and kickoff is scheduled for 5:00 p.m. CT.