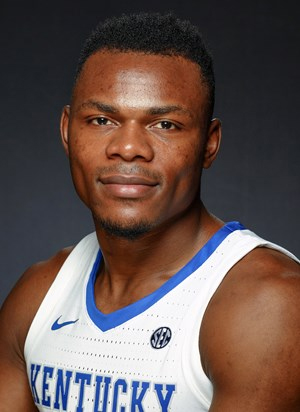 Almost everyone in college basketball is talking about Oscar – that Oscar playing for the UK.

He’s Lexington’s big man who operates the well-oiled rebounding machine that rarely breaks down. He can also effectively operate a scoring machine if his teammates need him.

He’s the 6-foot-9, 255-pound monster who terrorizes opponents, helping the Wildcats go 14-3 after Saturday’s 107-79 win over Tennessee. While grabbing a record 12 rebounds and scoring nine points against the Vols, he even had three career steals.

Against Vanderbilt last week in Nashville, Oscar was unbeatable, dominating the court with game-highs of 30 points and 13 rebounds. He became the first Wildcat player with a 30-10 showing since December 2008, when sophomore star Patrick Patterson had 33 points and 11 rebounds against Tennessee State.

Going into the action this week, Oscar is the nation’s leading rebounder with 14.88 caroms and is the SEC’s fourth-leading scorer with 16.53 points.

As you know, the Oscar I’m referring to is Oscar Tshiebwe, a junior who came to the UK last year from coach Bob Huggins’ West Virginia program. And Tshiebwe, originally from the Democratic Republic of Congo in central Africa, is quickly becoming a huge fan favorite with his magnetic and approachable personality.

As of this writing, the popular Tshiebwe is easily my pick for SEC Player of the Year honors because he’s posting impressive numbers overall while being a great teammate. He was also mentioned as one of the leading candidates for National Player of the Year.

If he wins the conference player of the year award, Tshiebwe would become the sixth Kentucky player to earn SEC honors under coach John Calipari. Former Calipari stars who have won the award (Associated Press or Coaches) include John Wall (2010), Anthony Davis (2012), Tyler Ulis (2016), Malik Monk (2017) and Immanuel Quickley (2020).

By the way, the communication major can speak six different languages. And Tshiebwe wears No. 34 on his Wildcat jersey because his favorite big man – Hall of Famer Hakeem Olajuwon who grew up in Nigeria – had the same number. He has lived in the United States since he was 16 and didn’t even see his family in person until last summer.

As you can see, the Big Blue Nation loves Tshiebwe and he’s been hanging out with fans, signing autographs or posing for photos, after UK games recently.

“These fans, we have to do whatever we have to do for them because without them we can’t do anything,” he explained in a post-match virtual press conference after the Vandy la contest. last week. “If they sacrificed themselves to follow us wherever we go, then we have to do something for them. We can’t just get up and leave when people need something, especially little children. I love spending time with small children. I can do anything for these children because they get into the game. We are their examples for what we do because they want to do it one day too. So we have to show them good things to follow so that as they grow up they can become good examples.

Tshiebwe was asked if he thought he would score 30 points in a game.

Jamie H. Vaught, a longtime sports columnist in Kentucky, is the author of five books on British basketball, including the recent “Chasing the Cats: A Kentucky Basketball Journey.” He is the editor and founder of KySportsStyle.com magazine and a professor at Southeast Kentucky Community and Technical College in Middlesboro. You can follow him on Twitter @KySportsStyle or reach him via email at [email protected]

“No, I never dreamed of scoring 30 points in a game,” he said. “It just happened. The team, they help me. They look at me there and I showed them that I can do things. I can score to help the team. I can do a lot of different things “It was good to finish with 30 points, but I have an ability below the post to finish. That’s what helped me and making free throws. It was a good thing.

What about that rebound record against WKU at Rupp Arena?

“First of all, it’s crazy. It’s crazy,” Tshiebwe said of the record. “For me, when I go out, I’m just going to fight. When I stop fighting is when the time is up. The game is over. That’s when I stop fighting. It’s about fighting. When I arrived here, I said to everyone and to the coach: I don’t care about points. I’m going to get my points, but I just want to go out and grab every rebound and fight to get the rebound. When I get 20 rebounds, I give more positions. It might seem like it helps us win again. It was one of the best things I did today, and we got the win. For me, it’s all about winning. I am here for this. »

Moments after setting an arena record for rebounds, Tshiebwe hosted a surprise locker room celebration with his teammates. The Wildcat star said he was grateful for this special moment with his team.

“It was incredible. Something like this has never happened in my life,” said a happy Tshiebwe, who played on two state championship teams at Kennedy Catholic High School in Pennsylvania. “It was amazing to see my teammates celebrating and pouring water on me like that. I think you can call me a beast for a while. I don’t think I’m considered a machine yet. If Coach Cal lets me going for those two rebounds, so if I come out with 30, maybe you can call me a machine. Right now, probably call me a beast.

Tshiebwe added that he is working very hard to become a reliable rebounder.

“I’m not the biggest guy, but I have a big heart,” he admitted. “When you need something, it doesn’t matter how big you are. My God said anything is possible. He didn’t say for some people, he said for everyone. When you go, you go the If you don’t go, they won’t bring it to you. For me, I just go and fight for it. That’s what I do: fight. When you go fight, you wait, and you’re still spinning, you’re gonna release something good.

“But when you stop fighting, that’s when you can’t get what you’re looking for. I never stop fighting. I always fight until the time is up. And I’m so blessed. God has been so good to me because I run better and I move better. And I have morals. I give thanks to God for about every day of my life for all that God has blessed me with. So I will continue to do my best to glorify His name and thank Him for everything. And I have to do the things that I have to help this team.

“That’s what he’s always been. I thought that when I saw him as a high schooler,” the WKU coach said. “Rebounding is about half the ability, and that other half is about the will, the will, that engine. He did that in high school. One thing that separated him from all the other big guys in the country was his engine on the offensive boards. He’s always done that.

“So naturally now Cal is having him score a bit. So when you score a little too, it just gives you more energy. He is much better offensively. We played him last year when he was in West Virginia. He’s not even close to the attacking player he used to be, so give their team a lot of credit. They did a good job developing it.

“But he has an engine, he is very proud to bounce back. That’s why he is the best in the country in this area. Twenty-eight rebounds? I never asked anyone to go for 28 rebounds.

Well, we can definitely agree that Oscar isn’t a mean machine. Instead, we can call him a Gentle Giant getting things done for the Wildcats.