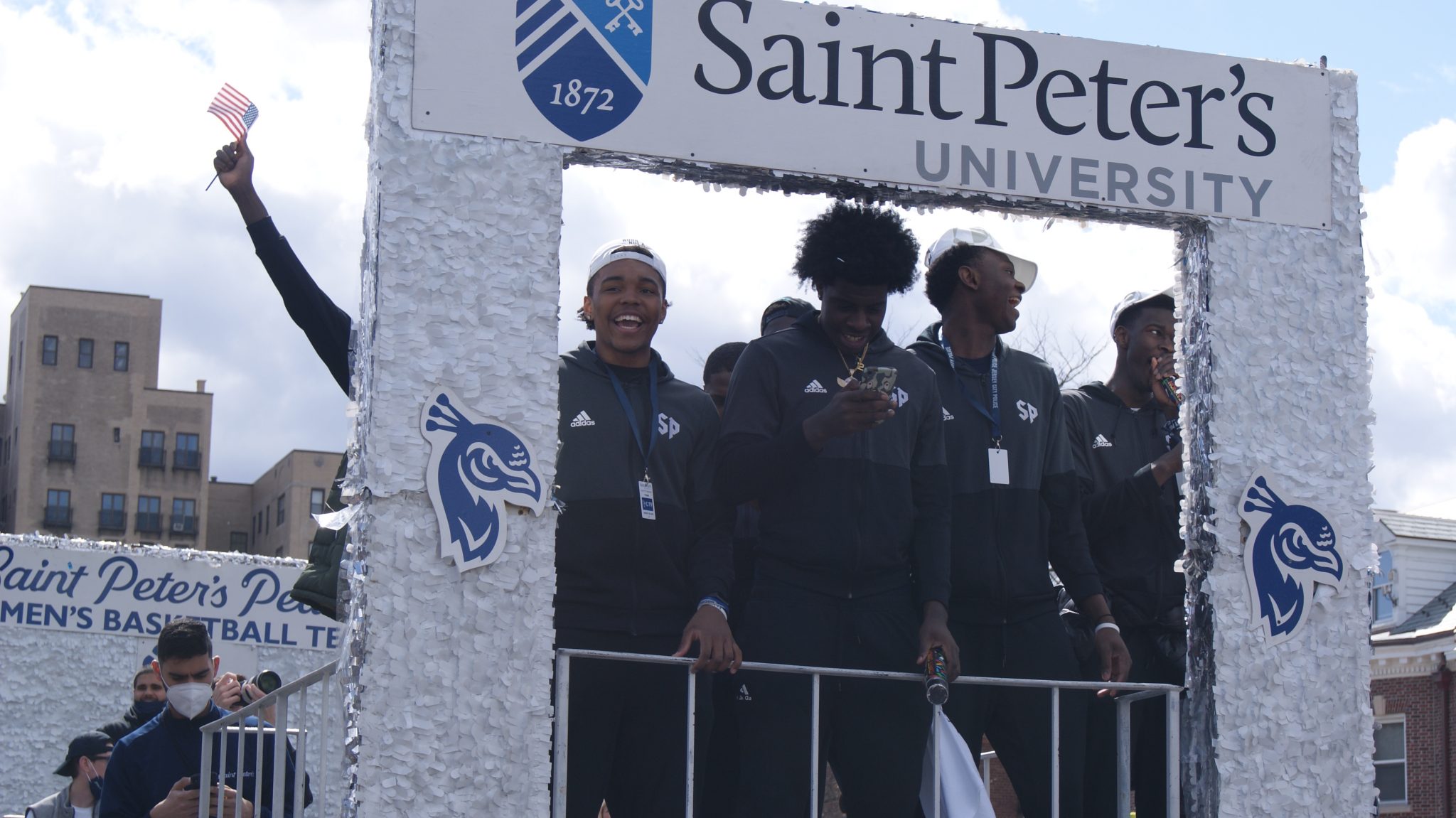 Jersey City residents and VIPs from across the city gathered along JFK Boulevard on Friday to celebrate the Saint Peter’s Peacocks’ historic run in the NCAA Men’s Tournament, where the team became the No. 15 in history to ever reach the Elite Eight.

“Jersey City get up, let’s go!” chanted coach Shaheen Holloway with the cheering crowd outside St. Peter’s campus. “We made history, all of us! Peacock country!”

The hometown heroes were greeted with jubilant cheers and confetti from residents, students, alumni, fans and officials, where they chained massive upsets in the tournament to reach the top eight and won the hearts of many for their underdog story.

Despite their elimination from the tournament on Sunday in North Carolina, the team was filled with pride and joy as they waved to the crowd en route to campus in bright blue and white floats, with residents and fans dressed in the t Peacock shirts, signs and merch all over the boulevard.

“I’m so excited to see them and to support them,” said Jacquilne Powell-Wick, who is a St. Peter’s alumni alongside her family.

Zeuvi Baber, another alum herself, attended the parade alongside her husband and daughter, who said the latter was a future peacock in the making. “It was just amazing,” Baber said of the team’s run. “I mean, it’s such a small school. What they were able to accomplish was just amazing and unbelievable to us.

Leading the parade were Jersey City police and firefighters, a host of municipal schools, alumni and officials from St. Peter’s, the city, Hudson County, the US Legislature. state and even the US Senate.

St. Peter player Isiah Dasher, who hails from Jersey City himself, was beaming as the whole town came together to celebrate the team. “You know, just a few guys playing basketball,” he said. “We didn’t even think we could go this far. Look at this.”

Doug Edert, the man with the mustache himself, rocked the crowd. “Make noise!” he shouted, the crowd chanting his name. “Make no mistake, none of this would have been possible without everyone here!”

US Senator Robert Menendez, a St. Peter’s alumnus himself, was also there to congratulate the team on their efforts.

“Some of my friends in the Senate were like, ‘We know what they did was impossible,'” he said. “And I told them, ‘No, you don’t understand. If you are from St. Peter’s University, nothing is impossible! Hard work, sacrifice, courage, determination, that’s what paid off.

Mayor Steven Fulop presented the team with the keys to the city, along with a proclamation to commemorate the day. “As long as St. Peters is here, and as long as Jersey City is here, today will be officially commemorated as a day we recognize the Peacocks as the best the city has to offer,” he exclaimed. .

The 4th of July t-shirt design contest is now open