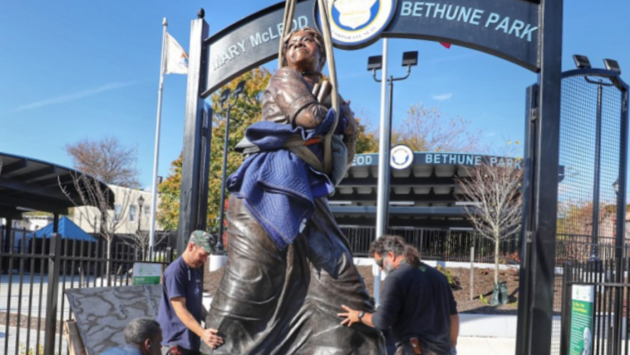 “This monument not only pays homage to a historic civil rights leader, but it also complements the much-needed park to signify a bright future where children now play together on the new playground, neighbors can bond at game tables and listen to music and other events in the amphitheater’s host community, ”Fulop said in a statement.

“This pandemic has underscored the growing need for accessible outdoor spaces to enable more passive recreational and community activities. This is exactly what Bethune Park offers our residents of Greenville and all of Jersey City. In addition, this statue of Mrs. Bethune places particular emphasis on the importance of education and perseverance, which will enable our residents today and for generations to come, ”added the Board Chair, Joyce Watterman.

The director of the Bethune Center, Alvin Petit, designed a monument based on a younger version of Bethune in his late twenties to early thirties.

“As a larger meaning, it also plays a role in linking our city to a national movement to erect monuments that symbolize diversity and inclusiveness. It will be the first statue in Jersey City to honor the legacy of an African-American woman, ”he added.

“As an artist, I am grateful for having had the opportunity to make such a lasting contribution to the city in which I have lived for 30 years.”

The statue of the monumental figure stands strategically in the main entrance to the park as the focal point of the new Bethune Park with the intention of arousing the curiosity of viewers to become more engaged in its legacy and contributions to the community of Jersey City.

The park can be used for recreation, celebrations, farmers’ markets and other community events. A new car park with charging stations for electric vehicles has also been set up nearby in order to preserve the existing parking offer.

“This Mary McLeod Bethune monument will empower residents and visitors and encourage people of all ages and ethnicities to embrace education and stand up for their rights,” said Ward B Councilor Mira Prinz-Arey, who chairs the open space trust fund committee.

“It’s a great way to pay tribute to Mary McLeod Bethune, an important person for Jersey City, while bringing art into our public spaces with this sculpture. “