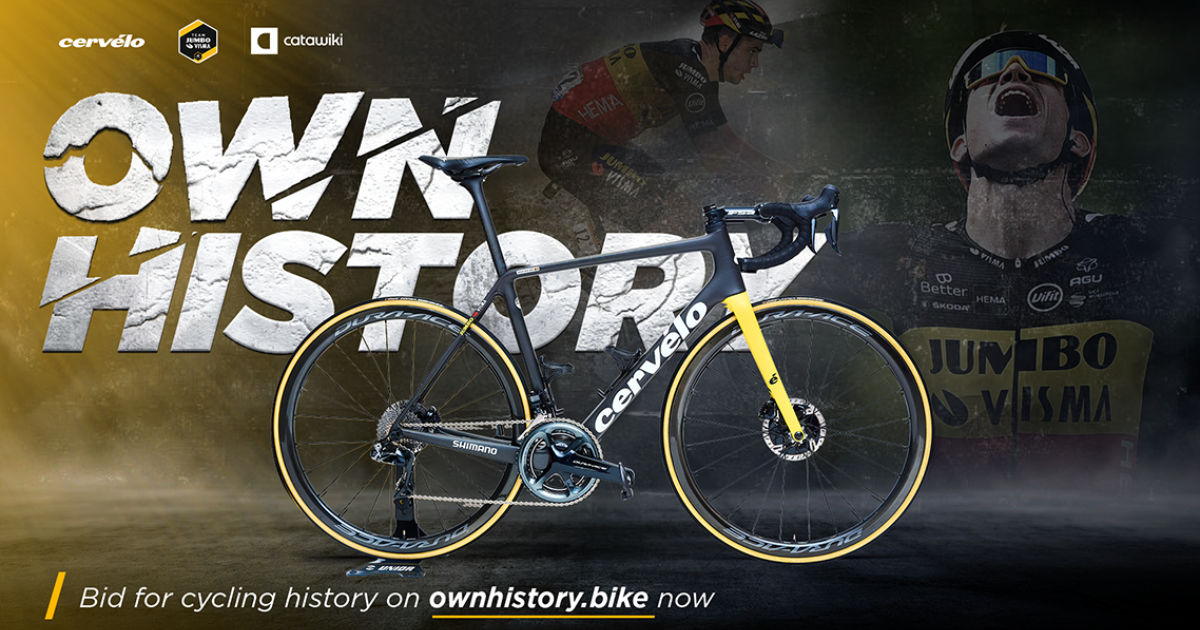 Jumbo-Visma Team | Place an offer! These bikes are available in the…

Wout van Aert
No one believed it would be possible. A cyclo-crosser, a sprinter or a time trial specialist who would lead me to the victory of a mountain stage of the Tour de France. This majestic afternoon, we amazed the world. A unique moment in the history of modern cycling.

Primoz Roglic
Craving yellow, but ends up in red. Together, we dreamed of a yellow jersey and yellow handlebars. The fact that it only turned red this year does not affect its brilliant shine. We fought for this, we have done it three times in a row and you are already looking to the future.

Jonas Vingegaard
Break the glass ceiling in the biggest cycling race on the planet. I felt the power from day one, pushing my pedals. Grabbing me by the handlebars. Together we fought through France and won second place overall. Our performance is etched forever in the history of the Tour de France.

Marianne Vos
It’s exciting to run with someone who has won almost everything. From cyclocross and mountain biking to the track and the road. It was so special to race at home and win the Amstel Gold Race. I was a grateful part of that moment in the history of cycling.

Dylan Groenewegen
Wait for this moment, practice it. The return. First victory of the Tour de Wallonie, the arrival at Héron is now part of my history.

George bennett
By the time we took to the stage in Italy we knew that all eyes were on us. I put my special design to support your Giro. But unfortunately, it did not go as planned. We gave everything and we will definitely remember both of our outfits.

Timo roosen
Col du Vam. June 20. That’s it. We wrote history with a tactical victory. Dress in the national colors. Red, white and blue will forever show our connection.

Lars boven
I saw you get stronger. Day by day. Race by race. As you ended up winning several races as a young rider. What a promising development. You have earned these first places in the history of cycling.

Primoz Roglic
We both believed in a positive finish. Never give in, never give up. Until the very last part of the final stage. It all came together. The work we did resulted in the victory of Itzulia Pays Basque. A great start to the season.

Tom dumoulin
For a while, I sat on the sidelines. But I saw your morale pick up day by day. The kilometers we covered in hilly Limburg would have made me smile if I could. I am proud to have participated in your historic return to Tokyo.

Hidde van Veenendaal
Together we celebrated the victories of our young teammates up close. At the Dutch Championship we made sure the red, white and blue went to the Jumbo-Visma development team. We were part of it. What a day it was.

Sepp Kuss
All the hard work. All efforts. Every kilometer of mountain training. It all came together on this sunny day in Andorra. This decisive moment when each rider was unleashed on the Beixalis during the Tour de France. You made me enter into the history of cycling.

Wout van Aert
We have won on so many occasions. Sometimes it felt like magic. The Amstel Gold Race, Gent-Wevelgem, Tour de Bretagne. Almost as if the finish line is drawn to us like a magnet. Unfortunately, we haven’t written the history of the Tour of Flanders. But the rest is.

Nathan Van Hooydonck
In Gand-Wevelgem, we were able to stand out from the noise. This 7th place was a recognition of talent and hard teamwork. I saw you were on fire during the Belgian spring classics and loved every inch of it.

Sepp Kuss
Together, we have shown our ability to make a difference. Not just to gain stages or protect our leader. But to finish in the top 10 in Spain. I am proud that your name has been on this list for a lifetime.

Sam oomen
From Paris to Nice via the Basque Country, we have left our traces. But the work we did in La Vuelta and the top 10 of the Tour de Suisse paved the way for cycling history. On new times, remembering the old.

Chris harper
Knocking on big names on the UAE Tour. We put your name in the 4th place. A solid team performance that shows a perspective for the future. No one can take that away from us.

Dylan Groenewegen
I am more than proud to have been the one to guide you back into competitive cycling. In our last year in black and yellow. Those first few meters in Turin are really historic for both of us. And it was just you and me.

Olav Kooij
Two new faces for the team who are writing history together. Your first year at this level. My first kilometers in black and yellow. And the story we made. September 29. Otocac, Croatia. Our first victory. Now you can take a look at the sequel.

Primoz Roglic
I was always near you. Sometimes on the roof of the car. Often feel your powerful legs on the pedals. The Tour de France was not made for books. Nonetheless, I enjoyed our moments in Spain. From the Basque Country to Madrid.

Steven kruijswijk
Unlucky in France but stable as a rock in Spain. We fought for the classification of our leader. Together we faced the battle towards El Barraco and unfortunately came in second. I have learned from your persistence and respect you deeply.

Anna henderson
Now everyone knows that the size of the frame doesn’t matter. Your first season on the team. Your first GC victory in the Tour de Belle. I’ve seen you perform better and better. Your name will be written a lot more in the future, but this year is in my pocket.

Robert gesink
I needed to be strong when you weren’t in competition. We fell. You broke your shoulder. Weeks later we were there again. Guide our leader to the red jersey. We have been a solid part of this achievement. Write our piece of cycling history.

Jonas Vingegaard
As a team of cyclists and cyclists, we felt the power during the Coppi e Bartali. An honor to see you win the GC there. And over as many strong kilometers from Spain to France. We definitely made history together.