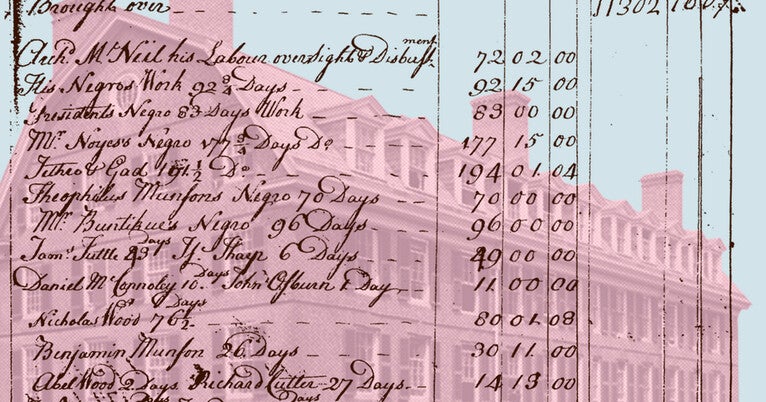 Over the past year, Yale academics, librarians, members of the New Haven community, and student researchers have delved into Yale’s past to better understand the university’s historic relationship to slavery and his legacy.

During a three-day college conference starting October 28, experts from Yale and the country will discuss what they have learned so far, including new information on the construction of Connecticut Hall, an iconic structure of the old campus built in part by African slaves. , and the “reconciliatory” approach of the Yale Civil War Memorial at Woolsey Hall.

Open to the public, the online conference, “Yale & Slavery in Historical Perspective,” is the latest in a series of events led by the Yale and Slavery Working Group (YSWG), which was convened by Yale President Peter Salovey in October 2020, to investigate Yale’s historical entanglements and associations with slavery, the slave trade, and abolition. Salovey will deliver opening remarks.

To register for the conference, which will take place on Zoom, or to view the full program of events, visit the website conference website. A YouTube video presentation playlist associated with the Yale & Slavery Research Project, including summaries of some of the research to date and student perspectives, is also available.

It is important that we illuminate every hidden corner of our past.

Salovey described the “Yale & Slavery” project – which is part of an ongoing national discussion on racism and discrimination – as an urgent consideration of the history of the university and an important opportunity to analyze it. , understand it and communicate it publicly.

“Like many of America’s oldest institutions, Yale rarely, if ever, recognized the work, experiences and contributions of slaves and their descendants to the history of our university or to our present, ”said Salovey. “For generations we have looked away from what is in sight. But now we recognize that slavery, the slave trade, and abolition are part of Yale history.

“It is important to bring to light every hidden corner of our past, because moving forward requires honest consideration of our history and because the purpose of our university is to create, preserve and disseminate knowledge. The foundational work we all share applies as much to Yale’s past as it does to anyone else.

Topics covered at the conference will include the theological roots of the university in the 18th century; the economy of wealth created by slavery; the place of southern slavers in Yale during its first two centuries; the breed’s medical and scientific heritage at Yale; abolitionist forces at the university; the history of work in the construction of the campus; and why the inclusion of Confederate veterans was central to the purpose of the university’s Civil War Memorial when it was established in 1915.

Following Salovey’s introduction on Thursday, discussions will begin with an introductory conversation themed “Universities, Slavery, and Memory” with David W. Blight, YSWG President, Sterling Professor of History and Director of the Gilder Lehrman Center for the Study. slavery, resistance and abolition at the MacMillan Center in Yale; Elizabeth Alexander ’84, president of the Andrew W. Mellon Foundation and former Yale faculty member; and former dean of Yale College Jonathan Holloway Ph.D. ’95, now president of Rutgers, the State University of New Jersey. Alexander and Holloway, in their writing and leadership, have been crucial voices on these issues.

President Salovey described the “Yale & Slavery” project as an urgent consideration of the history of the university.

Other panels will include conversations about slavery and academia; slavery and the economic landscape of colonial and 19th-century Connecticut; and slavery, religion and Yale. See the full schedule.

During a discussion on ‘Finding Slavery in the Archives’, research team leaders will present and discuss the findings of the YSWG’s extensive archival work, focusing on Yale’s involvement in the institution of slavery, its abolition in the United States and how this history is remembered. Crystal Feimster, associate professor of African American studies, history and American studies at Yale, and member of the YSWG, will moderate the discussion.

The presentations will include:

• “Yale, Rum, and Slavery” by Teanu Reid, a doctoral student in African American studies and history at Yale and research assistant for YSWG, who will discuss the results of archival research documenting slave labor in the Connecticut building Hall and 18th-century college donations from slave owners and members of the Connecticut assembly related to the sugar plantations of the West Indies.

• YSWG Research Assistant Steven Rome ’20, now a teacher at Cold Spring School in New Haven, will share his findings on the design of the Yale Civil War Memorial, inaugurated in 1915, which honored both soldiers from Yale Union and Confederate soldiers. He will discuss archival documents related to the memorial – as well as opposing views on design from that period that were not included in the archives.

• Doctorate History candidate Bennet Parten will speak about “Reading the Archive Around the 1831 Negro College,” focusing on an unsuccessful attempt to build a black men’s college in New Haven in 1831.

During a luncheon on Friday, Courtney Martin, director of the Yale Center for British Art, and Edward Town, responsible for information and access to the centre’s collections, will discuss a painting from around 1719 belonging to in the center which represents a child of African descent pouring wine for Elihu Yale, one of the first and eminent benefactors of the university. Martin and Town will share what is known about the enslaved child and Elihu Yale’s connection to slavery.

On Saturday, the conference resumes with expert discussions on race, art and iconography at Yale, and how the ideologies of racial differences and the social hierarchies that accompany them have been constructed in the fields of medicine and science at the university.

The conference ends with a panel discussion moderated by Blight on “Race, Slavery and Yale Building Memory”. A panel of academics will discuss how universities and other institutions deal with their past or present engagements with racial ideologies and practices, with a focus on how Yale has forged its own historical memory over time.

The presenters will also share ideas on how Yale and other universities can move forward.

The Yale & Slavery task force aims to publish a full report of the research findings and recommendations by the middle of next year.

Our amendments for the municipal council