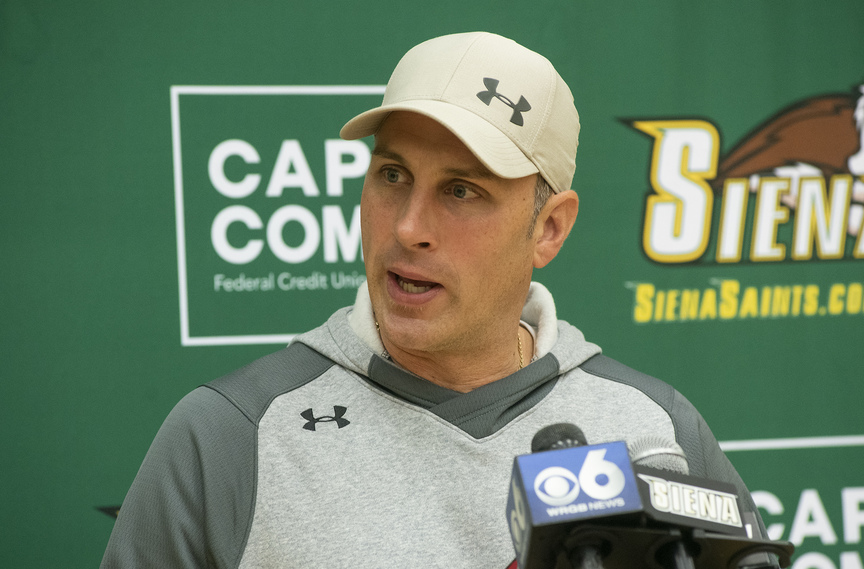 Less than a week after suffering a double-digit loss at Monmouth, the Siena men’s basketball team gets a second chance against the Hawks.

Siena and Monmouth meet Sunday at 2 p.m. at MVP Arena in Albany for the Saints’ final home game of the regular season. Siena (11-6 MAAC, 14-11 overall) and Monmouth (10-7, 18-10) are still in contention for the second seed in the upcoming MAAC tournament.

When the teams met Tuesday in West Long Branch, New Jersey, Monmouth outscored Siena 71-59 in a game that saw the Hawks lead by up to 21 points in the second half. Siena made just 21 of 66 in total from the field in this game. George Papas led Monmouth with 18 points, Walker Miller added 15 and Shavar Reynolds drove in a dozen. Nikkei Rutty scored just two points but had a career-high 19 rebounds. For the Saints, Jackson Stormo had 16 points and nine rebounds.

Siena bounced back with a 78-71 win Thursday over Quinnipiac at the People’s United Center in Hamden, Connecticut. Perhaps most importantly, however, Siena was given the chance to rest after this victory; the victory over Quinnipiac ended a four-game-in-seven-day streak for Saints head coach Carmen Maciariello.

Since playing against Siena, Monmouth lost 70-65 on Friday against Saint Peter’s (11-6, 13-11). The Saints’ game against Monmouth will be their first since their February 18 loss to Marist in which they just took more rest days than their opponent.

Every MAAC team is in action on Sunday except Marist (9-9, 14-13), and a loss to Monmouth could seriously hurt the Saints’ chances of claiming the No. 2 seed for the tournament. MAAC.

For now, Siena controls his own fate at the No. 2 seed; if the Saints win their last three games, they will take the No. 2 seed. At the moment, Siena is tied with Saint Peter’s for that spot, but Siena swept Saint Peter’s season streak to win this break head-to-head tie.

A loss for Siena to Monmouth, however, would mean the Saints could finish the weekend anywhere from second to fourth with only their two-game trip to Western New York in their regular season – and the last time Siena won on the road at Canisius (4-13, 8-20) and Niagara (7-10, 12-14) in back-to-back games was in 2016.

Siena has already earned a MAAC first-round bye, as have Iona and Saint Peter’s. Iona clinched the MAAC regular season championship and the No. 1 seed for the playoffs.

Siena will celebrate seniors day ahead of their game against Monmouth, and Maciariello said the Saints would pay tribute to five members of their programme: scholarship holders Nick Hopkins, Anthony Gaines and Michael Tertsea, passing player Rob Mahala and manager Carter Morelli .

Among scholarship players, Gaines could play one more college season, but Maciariello said “the plan was for one year” for the Siena graduate student. Hopkins and Tertsea have no further eligibility to play after this season.

Siena has other seniors and graduate students – Michael Baer, ​​Jayce Johnson, Andrew Platek and Jackson Stormo – on his list, but Maciariello said those players are expected to return next season for the Saints.

A four-year member of the Siena program, Mahala has been captain of the Saints for two years. The passing player has regularly received praise from Maciariello throughout his career at Siena.

“He has a lot of character, he is hardworking, dedicated. He understands his role and understands basketball,” Maciariello recently said on Mahala. “He knows every position on the pitch and every play.”

More from The Daily Gazette: