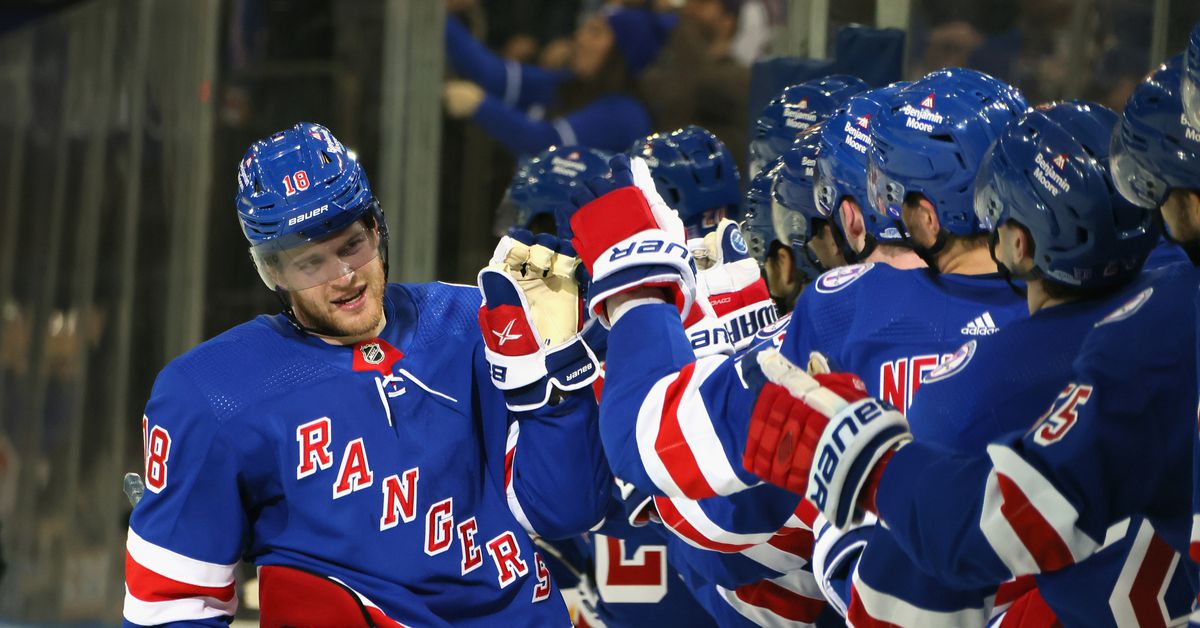 Rangers vs Penguins: Rangers bounce back and edge Penguins 5-1

The New York Rangers bounced back in spectacular fashion tonight as they edged the Pittsburgh Penguins to a 5-1 win at Madison Square Garden. Across the lineup, the Rangers were the better team all night and overran the Penguins in the offensive zone. Rangers’ constant pressure on offense essentially wiped out the Penguins’ counterattack, and other than a power play count, Rangers kept the Penguins at bay. Igor Shesterkin had a relatively light workload throughout the night, but he certainly entertained the crowd with a few pennies in the middle of the ice.

After Tuesday night’s debacle against the New Jersey Devils, the Rangers knew they had to be better, and they certainly were. They were flying from the first face-off and just over two minutes into the game, Rangers quickly took a 1-0 lead on the scoreboard. Filip Chytil led a quick transition game in the offensive zone, and found Alexis Lafrenière with a step on his defender. Lafrenière managed to recover the loose puck, fended off the backcheck and slid the puck under Tristian Jarry.

Less than two minutes later, it would be Rangers striking for the second time as they caught Pittsburgh napping on a quick transition. Pittsburgh had four players off guard after a rushing attempt, and Mika Zibanejad made them pay with an immediate out to Chris Kreider. Kreider played smart flying over the zone early and was wide open when Zibanejad took possession of the puck. Kreider had plenty of time and space to make a move and fired a shot past Jarry on the blocker side to give New York a 2-0 lead.

Rangers had no interest in stopping at just two, and 18 seconds after Kreider’s count, Frank Vatrano gave New York a 3-0 lead. The front line got back to work after winning the faceoff, and they dominated the Penguins below the goal line. Zibanejad was able to fool both defenders with his eyes which left Frank Vatrano wide open in front of the net. Vatrano wasted no time when the puck hit his boards and scored his first “official” goal as a Ranger.

Although Rangers were shorthanded early in the second period, their offensive pressure didn’t let up. Chris Kreider was able to force a turnover just inside the Rangers blue line, and he sent a puck into open space for Mika Zibanejad. Zibanejad was able to win the run, skate right through the circle and knock Chris Kreider to the ice. Kreider went into a heavy one-timer from his left knee and buried the puck past Tristan Jarry on the glove hand.

Early in the third period, Rangers were tasked with more penalty elimination duties as Patrik Nemeth was sent off for ‘roughing up’ Sidney Crosby. New York’s shorthandedness was great all night, but their only hit on the radar came in the sixth minute of the third period. Kasperi Kapanen’s turnover wrist made its way through traffic and ended up in the back of the net after a deflection from Jeff Carter. Igor Shesterkin never saw the shot with the screen in front and the Penguins fell to within three goals.

With less than three minutes remaining in regulation time, Rangers kept their foot on the accelerator pedal and added a final scorer. Ryan Strome started the game with a quick rim around the boards to Artemiy Panarin. Panarin managed to draw two defenders towards him and returned a ridiculous no-look pass in front of the net. Andrew Copp was ready and waiting in the open lane, and scored his first goal as Rangers to make it a 5-1 game.

After the New Jersey debacle earlier in the week, the Rangers certainly made a statement with tonight’s win. The offensive pressure was constant, and the Rangers manhandled a potential first-round playoff opponent in front of their home crowd. Following tonight’s impressive win, the Rangers will stay in New York tomorrow before returning to action Sunday night against the Buffalo Sabers.

What traits will Matt McMahon look for in LSU basketball assistant coaches?