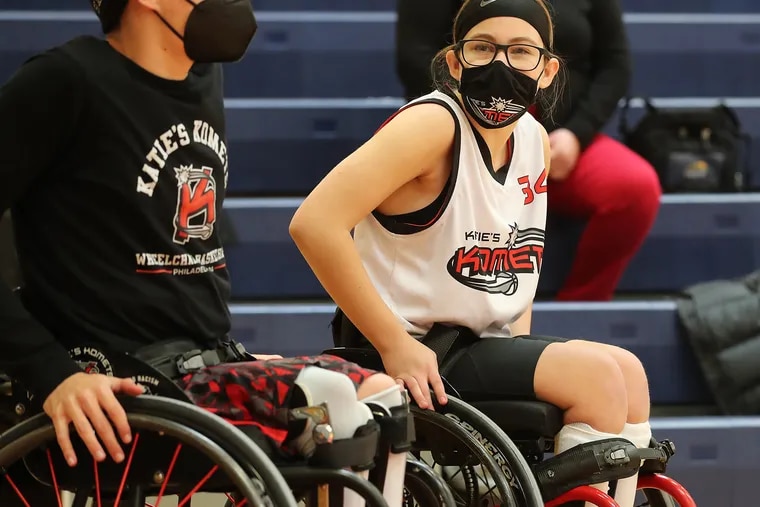 Caroline Fitzpatrick was a teenager in her element, with the sound of bouncing basketballs and the clank of metal echoing around a high school gymnasium on a Sunday afternoon.

His loyalty and attention, however, were both divided.

Fitzpatrick wore a jersey for Katie’s Komets, Philadelphia’s National Wheelchair Basketball Association team – but she was supporting New York as they played inside West Philadelphia’s school of the future.

There’s an explanation: Fitzpatrick, a 14-year-old point guard from Komets, had lost earlier Sunday at the 24th annual Katie Kirlin Youth Wheelchair Basketball Tournament, but she stayed to watch New York, a team for which she had already played.

Plus, Fitzpatrick is a South Jersey girl who really loves basketball. The tournament was canceled last year due to COVID. Now it was back, and she was rolling from court to court watching New York’s prep and college division games, which were being played simultaneously.

“Come on, Charlie, you get it! Fitzpatrick yelled at a former 13-and-under teammate, before pivoting to catch up on college action.

Fitzpatrick, from Blackwood, started playing basketball five years ago and has since made friends across the country. Last year she was named MVP at the Nationals in Wichita, Kan.

“I love the competition and I love the game,” she said. “It’s kind of like a family.”

Sunday’s tournament, an East Coast qualifier for the nationals that drew more than 100 players from Virginia to New York, is named after Katie Kirlin, who died of cancer in 1989 at age 12. During the last years of her life, she excelled in wheelchair swimming and athletics.

Kirlin’s parents, Joe and Roseann Kirlin, of South Philadelphia, set up a fund in her name that sponsors wheelchair events and helps with equipment, travel and meal costs.

“They are terrific athletes,” said Joe Kirlin. “They just lie on a chair.”

“We have lost our best player! Kirlin joked.

Jordan McCown, 17, who played for the Komets on Sunday, is heading to Edinboro University on a basketball scholarship. Born with Caudal Regression Syndrome, which affects the development of the lower half of the body, McCown first encountered the sport at age 9 when he saw it on Disney Channel.

“I decided I wanted to give it a try and have been playing ever since,” he said.

In Sunday’s tournament, hosted by Philadelphia Parks and Recreation and sponsored by Toyota, the Bennett Blazers of Baltimore, Md. won the prep and varsity divisions and will advance to the national tournament in the spring.

Among the spectators was Steve Serio, Paralympic gold medalist for Team USA.

“It’s a sport that teaches children with disabilities life lessons,” Serio said. “I like the inclusiveness the most. Kids with all sorts of disabilities and abilities can play the game in a very cooperative environment.”

There are no squeaky sneakers, but the competition is fierce.

“You see how competitive they are. They are brutal! Roseann Kirlin said with a laugh, as the players jostled for position, sometimes bumping into each other’s chairs on a wheel.

Off the court, youth wheelchair basketball also creates a network for parents. The players hosted a pizza party on Saturday night, while parents were able to share tips, from finding the right doctors to affordable medical supplies.

“It gives the kids an opportunity to hang out, but also the parents to talk to other parents,” Caroline’s dad Brian Fitzpatrick said.

As for Caroline, after being named Youth MVP, she is now in her freshman year at the college level, but looks fearless. In addition to the Komets, Fitzpatrick also plays with the Charlotte Rollin’ Hornets women’s team in North Carolina. The family travels a few times a year for tournaments.

“She found what she loves,” her father said.

Joe Kirlin suspects there are hundreds of kids in wheelchairs in the Philadelphia area who would feel the same if they picked up a basketball. He encourages parents to come forward.

“We are always looking for more athletes,” he said.